I seem to be drifting towards tweeting more than blogging but after today’s events then 140 words is never going to describe our day in a million years.

After spending yesterday in glorious sunshine at Oversley Wood near Stratford on Avon managing 69 butterflies from 6 species plus 3 Orange Underwing moths and many species of Bee Fly’s and mining bees including Ashy which was a county first for us we arrived at an overcast Draycote Water this morning not expecting much. As we walked along farborough bank both Dave and I tried to be all macho like about the flies but to be honest due to the trillions that were out I would have been happy to have turned around and gone for a shower. 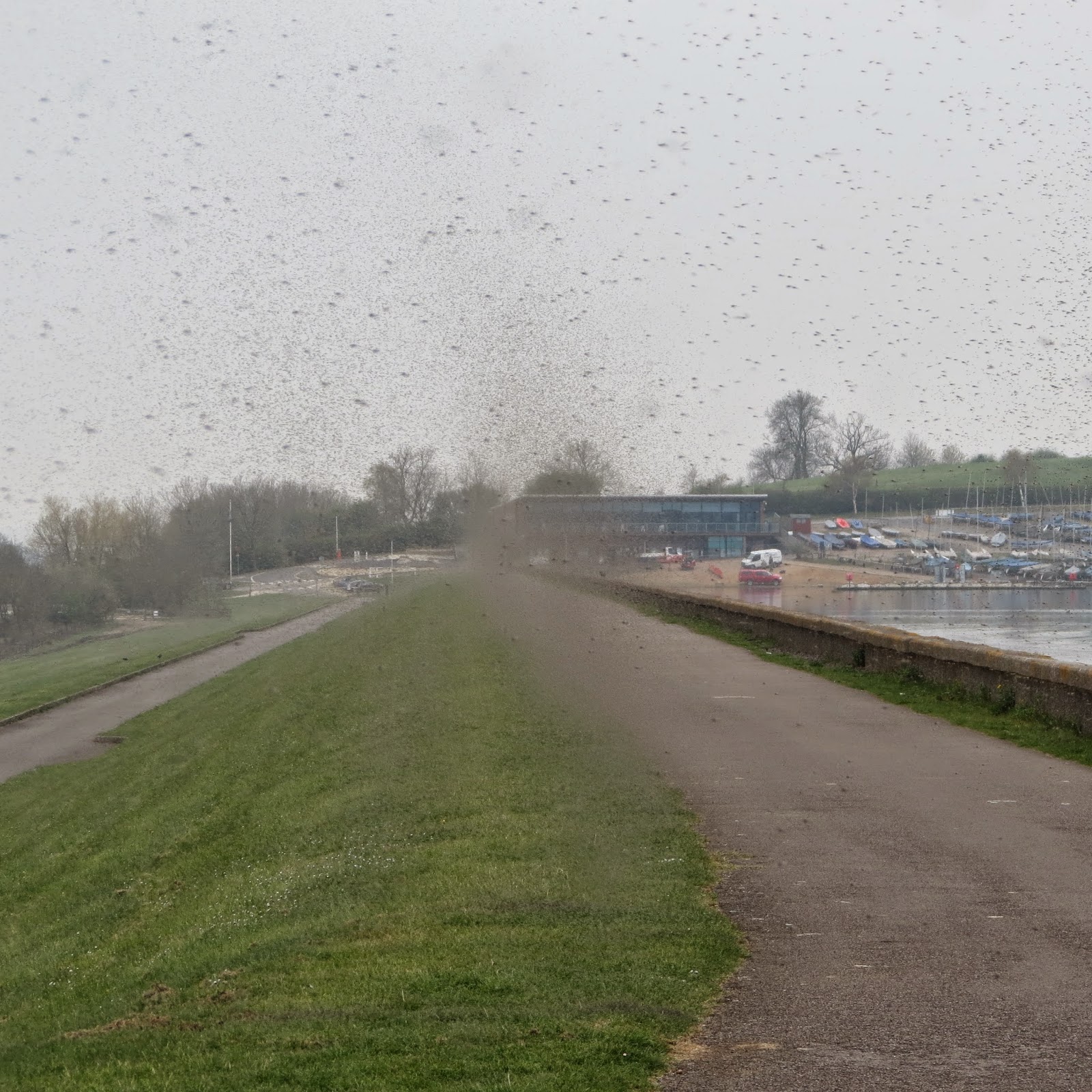 Luckily the 2 Ringed Plover, 2 Yellow Wagtail, 3 Little Egrets and Little Gull kept us occupied and on our return Bob Hazell put us on to our first Common Tern of the year. While listening to the warblers in the car park Bob rang with a Red Kite heading south and it went over our heads – magic. A clear down of the STW Draycote moth trap which had Herald and Saterlitte then it was off to Long Itchington for breakfast.

Our first stop afterwards was Napton on the Hill which was a bit livelier than of late with Nuthatch, Coal Tit, Peregrine, 15 Raven and 6 Buzzard but apart from a few warblers on site the only migrant was a Swallow going north. First Speckled Wood of the year brings my county year list up to 12.

Despite attracting Ring Ousel, Mandarin Duck and White Wagtail over the last week we arrived at Napton Reservoir not expecting the birding gods to have 3 goodies lined up for us. The first was a White Wagtail on the causeway being pushed around by the dog walkers, the second a stonking male Whinchat on the perimeter hedgerow but these two were nothing compared to the brilliant ghostly harrier hunting the large field between us and the road. I immediately screamed some gibberish at Dave that included Hen Harrier though it might be a montys but that was the last sensible thought I had as I then continued to think it was a Hen Harrier. Watched it for three minutes before it swung towards us over the reservoir and away. We had tweeted the news out and luckily Bob arrived and once he saw my poor image he put all the sweeties, icing and cherries on our local birding cake with a matter of fact - that’s a MONTYs you b*****d. 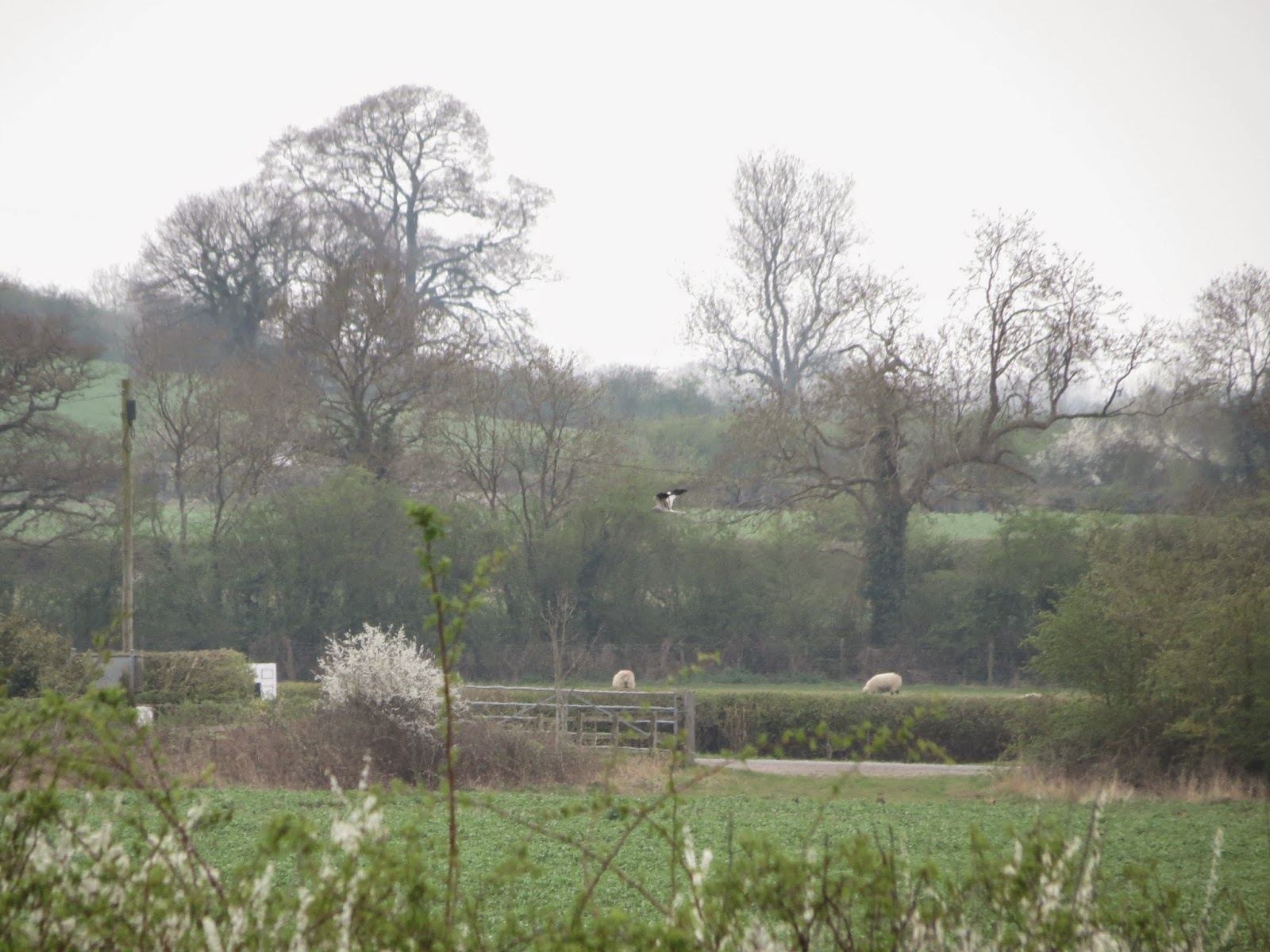 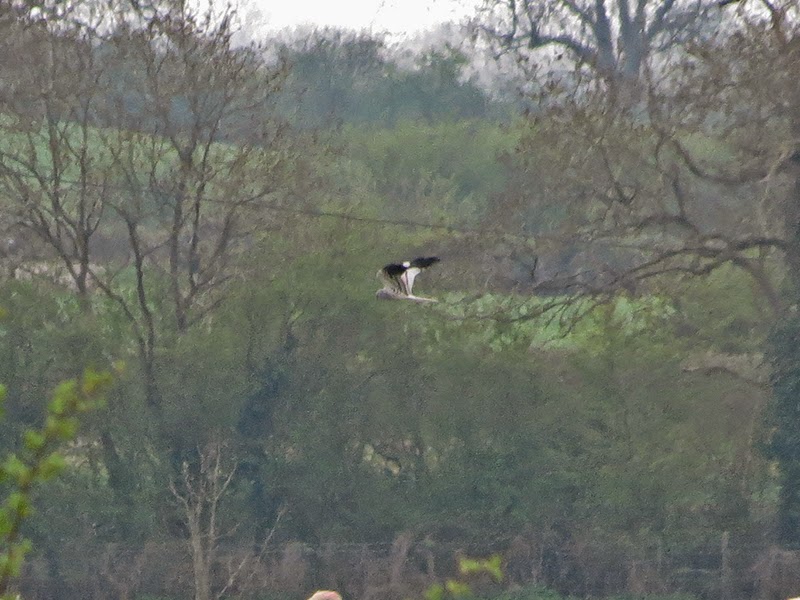 ﻿
Also seen on our travels were 4 Sparrowhawk, more Yellow Wagtails away from Draycote Water and Jay.

Long overdue but something a bit more varied to write about than of late.


Both the 2 White-fronted Geese and Pink-footed Goose were in the field next to Toft Cottage Farm along the Southam Road from Dunchurch. They seem to like this field in the morning recently before moving closer to Draycote Water later in the day but the Greylag flock is dwindling with only 40 birds present today.


On the reservoir itself then the Black-necked Grebe was off farborough bank while overnight a good number of duck arrived and were resting out in the centre with 50 Teal, 30 Wigeon, 3 Shoveler plus male and female Pintail before the first fishing boats of the morning flushed them off. Still 20+ Goldeneye and a single Pochard male. No sign of any Little Egrets as we peered through the gloom though 3 were present yesterday near the valve tower but with high water levels they are easily spooked by the first walkers or runners of the day.  Other sightings included Chiffchaff, 40 Fieldfare and 30 Meadow Pipit


Having taken an hour to reach the spit we changed our attention away from the birds to the eclipse and with a bit of a heath robinson idea from Dave we used our scopes and paper to follow its progression over the next hour. 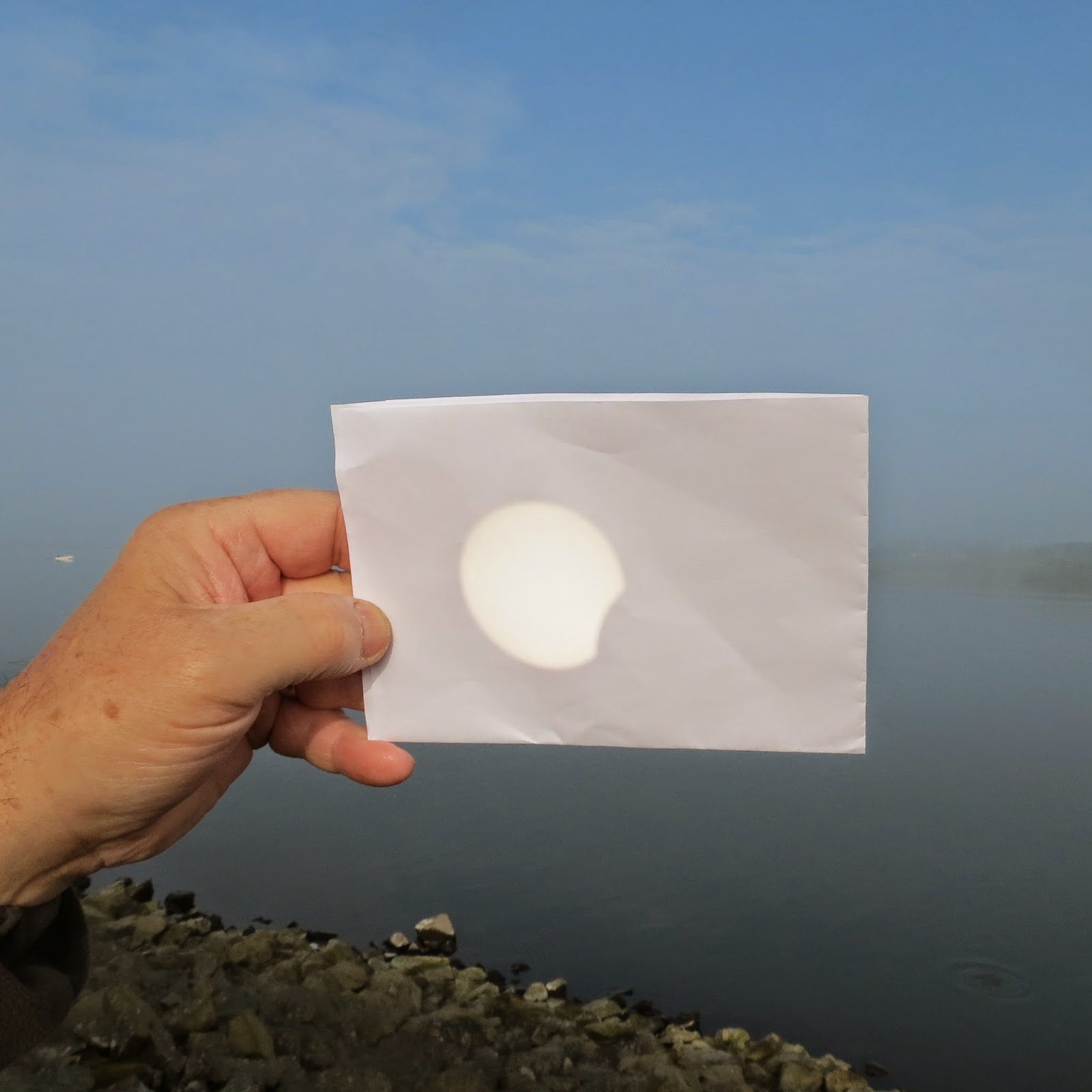 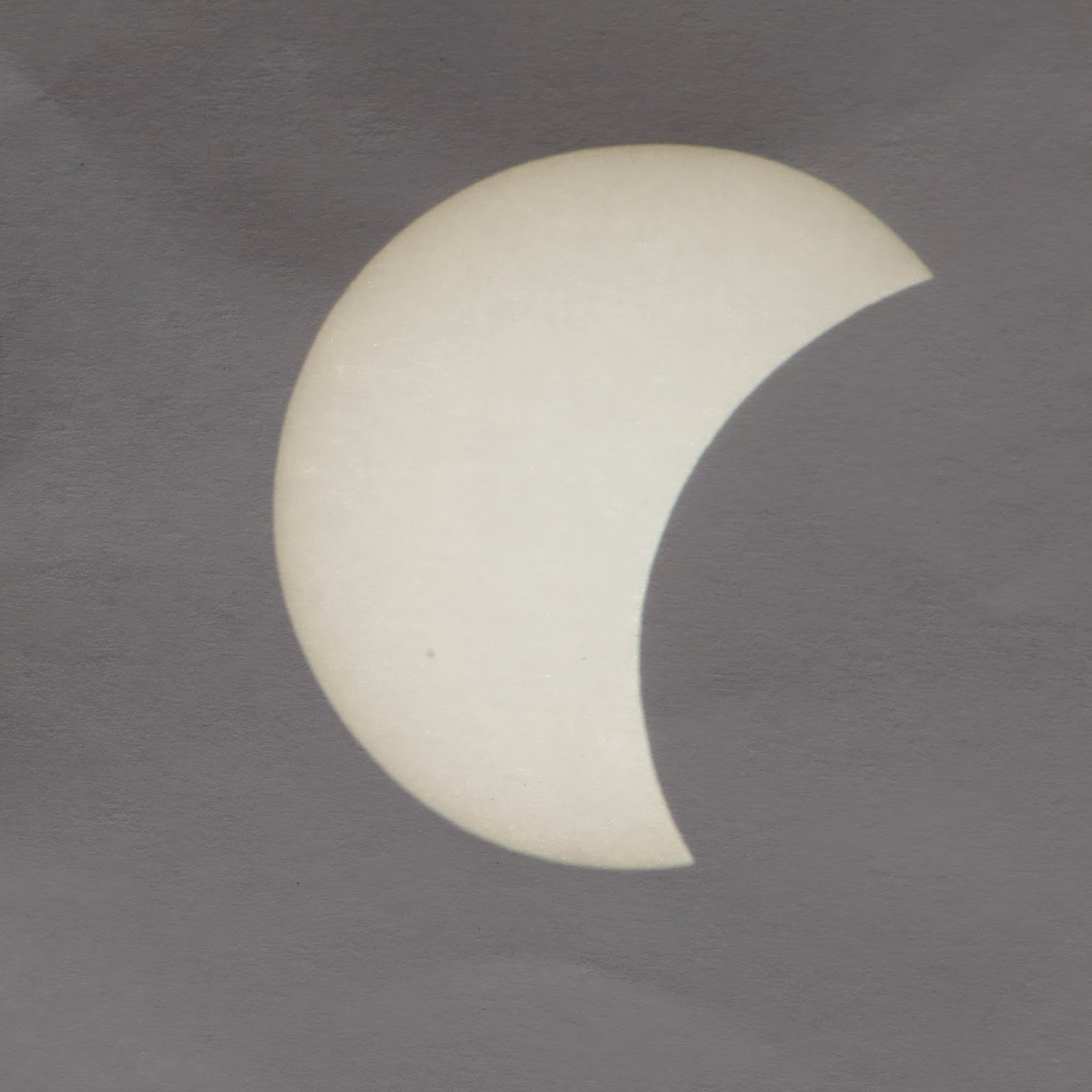 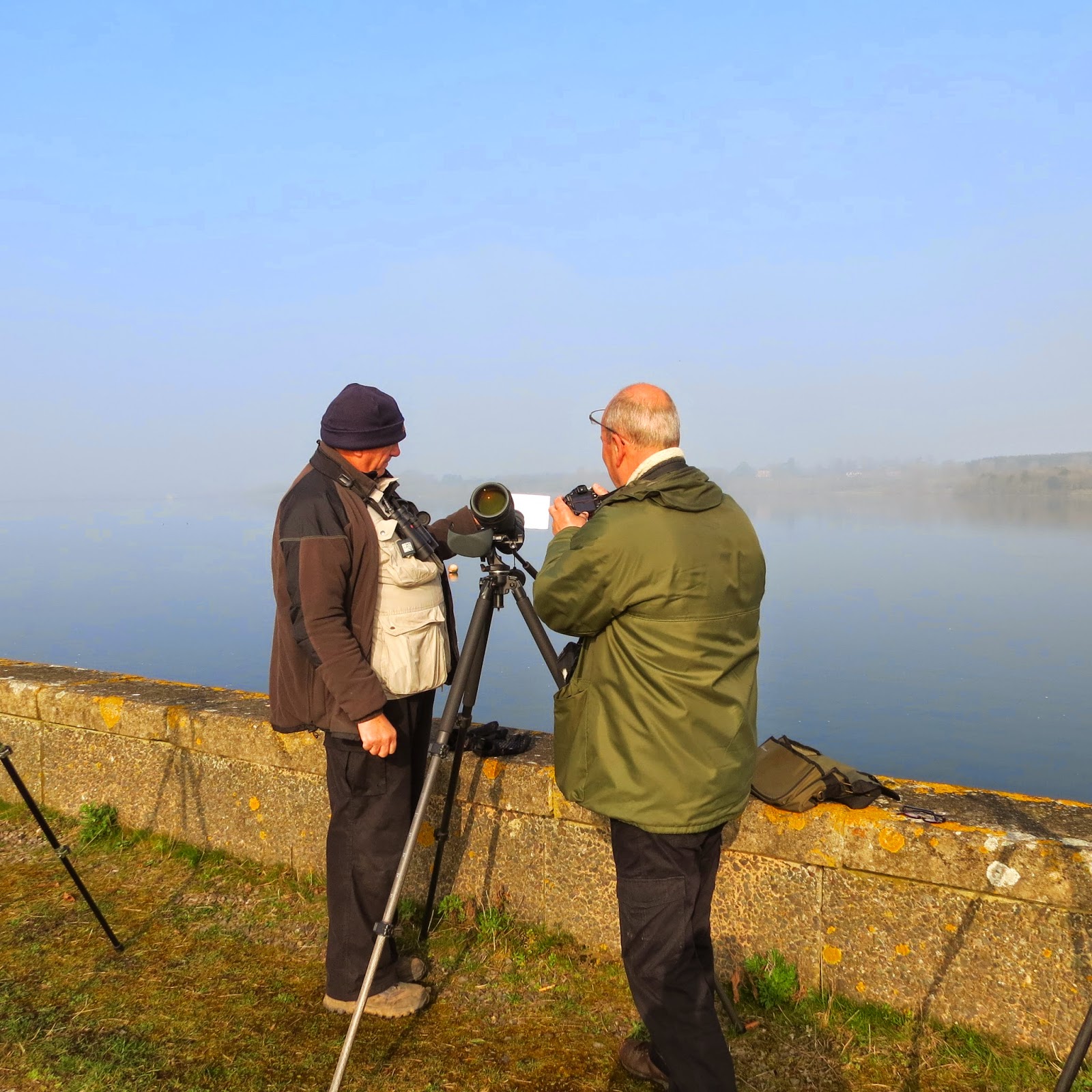 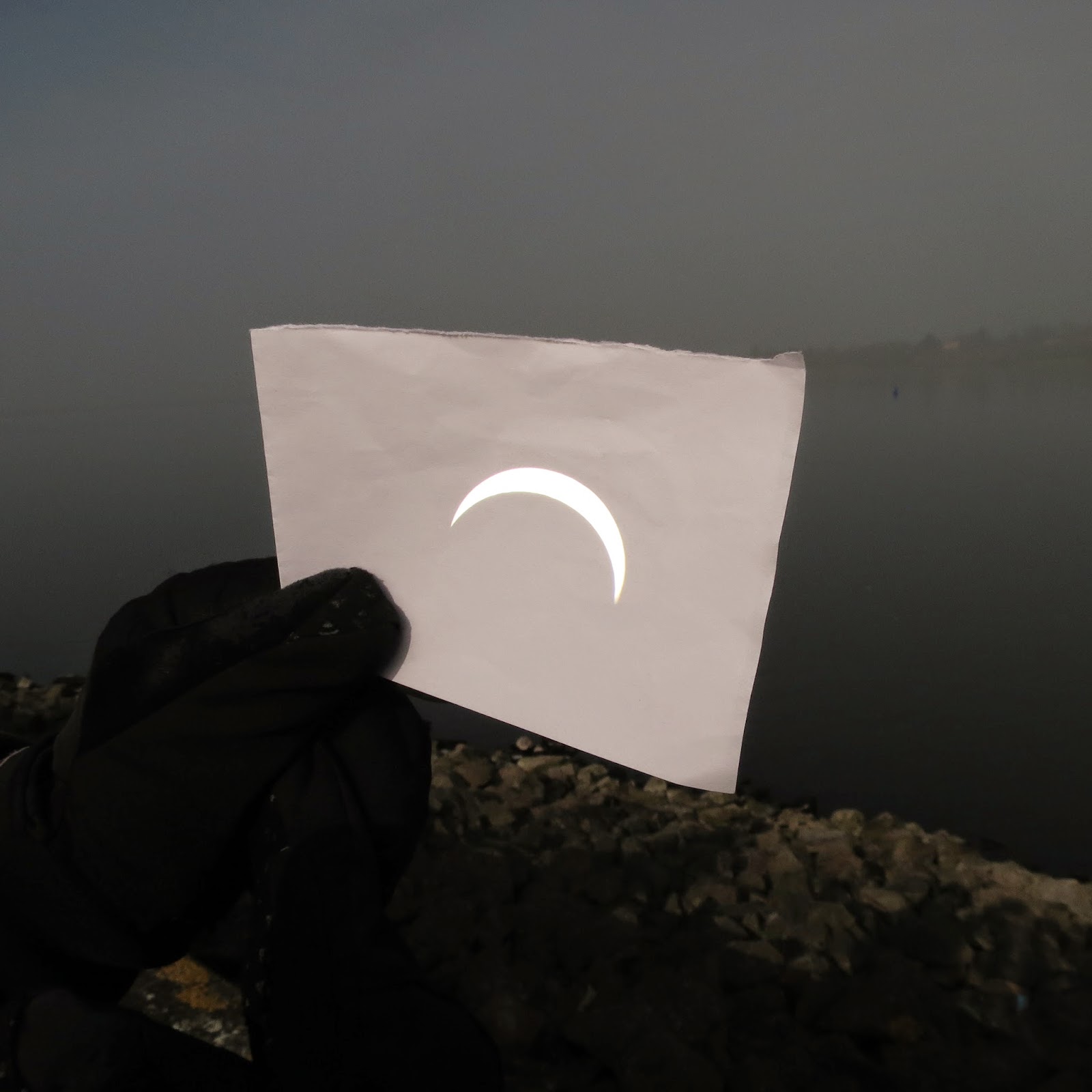 After the eclipse we moved on to Napton on the Hill where there were still a few Redwing, 5 Raven, 7 Buzzard, Great-spotted Woodpecker and a Coal Tit before ending up at Napton Reservoir which was inundated with Common Gull with at least 700 present along with 7 Teal, Raven and Green Woodpecker. With the temperature rising we were lucky enough to see Brimstone butterflies at Napton on the Hill, Broadwell, Dunchurch and on my estate in Rugby.
Posted by Richard Mays at 10:39 No comments:

Very poor conditions on arrival at Draycote Water and while discussing with Dave whether it was worth taking a scope a Brent Goose flew low over the car park heading east which made our mind up for us. The Pink-footed Goose was in fields below the spit before they flew off replaced by a Canada Geese flock which had the Canada x Greylag hybrid but nothing else. We continued to toft shallows picking out the Black-necked Grebe easily enough along toft bank and from the board walk the Water Rail showed reasonably well and only other bird of note was a Chiffchaff at the end of toft bank and a Sparrowhawk. Fog seemed to thicken after chatting with Bob and we failed to see the sailing club well so no chance on the male Smew which was nearby. Did not have time for any other locations this morning but did see the 2 Little Owl at Kites Hardwick.
Posted by Richard Mays at 05:52 No comments: